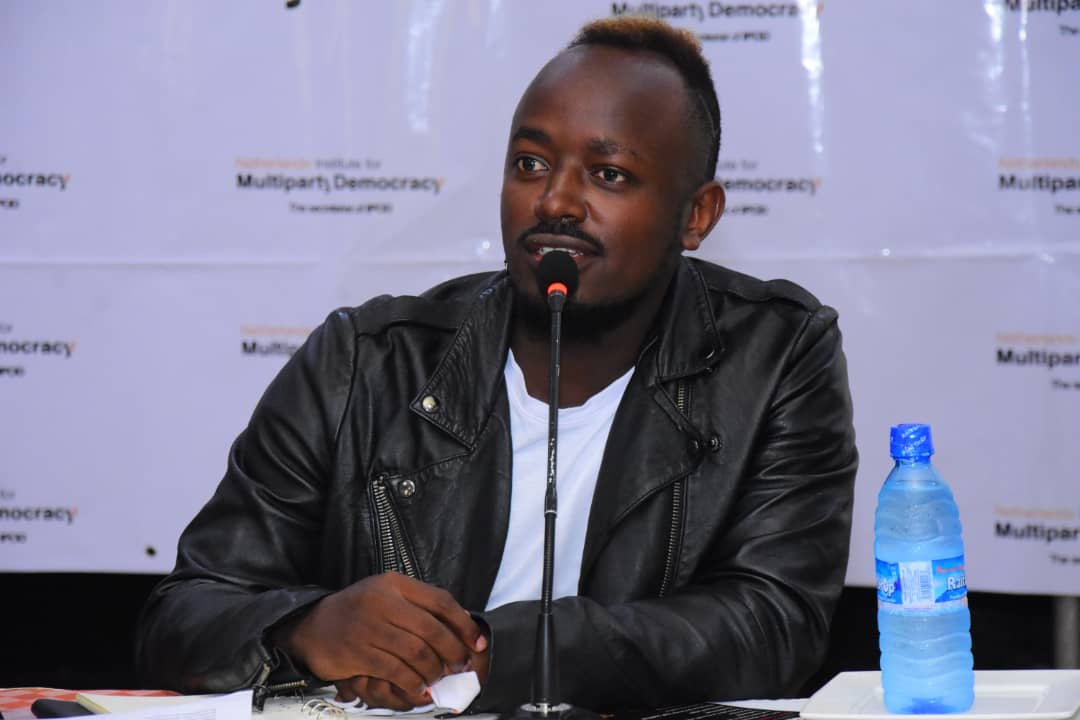 Ugandan musicians under their umbrella body, the Uganda Musicians Association (UMA) have added their voices to the I Choose Peace campaign, in a new song dubbed ‘Londa Dembe’, a Luganda term to mean Choose Peace. The song which was inspired by the recent spikes in election violence and impunity across the country, appeals to all Ugandans especially the youth to choose peace throughout the election period.

The ‘I Choose Peace’ campaign that was launched last week by the Netherlands Institute for Multiparty Democracy (NIMD) in partnership with the Inter Party Organization for Dialogue (IPOD) is aimed at promoting peaceful participation in elections. The campaign was officiated by the Secretaries General of political parties with representation in parliament, namely; Democratic Party (DP), the Forum for Democratic Change (FDC), Justice Forum (JEEMA), the National Resistance Movement (NRM), and the Uganda People’s Congress (UPC).

The I Choose Peace campaign is targeted at all individuals including security forces, political parties, aspirants and the electorate. The campaign intends to foster a democratic environment that aids free multiparty involvement in the election process while observing a peaceful and conflict-free political atmosphere in Uganda come 2021 and beyond.

Nearly two and a half weeks ago, the country witnessed very ugly incidents of riots and violence resulting into numerous lives lost, property damaged and disruption of businesses. Social media was awash with hate speech and tribalistic innuendos. This state of affairs, if left unchecked, portends a much worse situation ahead of us.- Advertisement –

It is against that background that many Ugandans of goodwill came out to condemn these senseless acts of violence and impunity among them, Ugandan artists who variously took to their social media platforms to condemn all forms of violence that put so many lives at risk and cautioned youth and their fans, to refrain from violence.

The event was flagged off with the singing of both the East African, and Ugandan National anthems. Speaking to the media during a press event held at Kati Kati (Lugogo), Mr. Tugume Wycliffe also professionally known as Ykee Benda the President of the Uganda Musicians Association (UMA), professed his solidarity towards choosing peace at all times during this election period. “By pledging our allegiance to the I Choose Peace campaign, we intend to use our platforms to reach out to our fans especially the youth who have stood out in instances of violence to preach the message of peace and harmony,” he said, adding that, “we all want a thriving Uganda, one where dreamers like us are achieving their goals and this can only be possible if we desist from actions that will either get us killed, stifle our business or cause irrecoverable injury to our bodies.” “I therefore call upon each and every Ugandan especially the youth to choose peace for today and tomorrow,” he concluded.

Mr. Frank Rusa, the Netherlands Institute for Multiparty Democracy (NIMD) Country Representative, reiterated that, “the single most important message that we have to echo in this time of elections is one of PEACEFUL participation.” Mr. Rusa noted that NIMD’s recently launched I Choose Peace  campaign, saw all the IPOD Political Party Secretaries General sign a pledge towards supporting peaceful and non-violent election processes in Uganda and called upon all other political party leaders and independent political actors to follow suit and embrace this noble effort.

“We believe therefore that with the help of our artists who have such a wide appeal in the Ugandan public, our message of peaceful participation will reach thousands of men and women from all walks of life and have long lasting impact in shaping the democratic culture of tolerance and co-existence in our motherland Uganda,” he remarked.

Officially launching the song composed by the artists under the Uganda Musicians Association (UMA), Hon. Kateregga Mohammed, the Secretary General of JEEMA and current Chair of the IPOD Council, applauded Uganda Musicians Association (UMA) for the song and welcomed their partnership saying that “in past and recent history, we have all witnessed the significant role music plays in ending or changing the narrative around societal upheavals, it is without a doubt therefore that I believe this song, standing  as a unifying factor will impact our youth and the general public.”

“On behalf of IPOD, I am happy to see them join hands with us as we strive to ensure that peace is maintained throughout the campaigns and election period. As political leaders, it is incumbent upon us to encourage all sectors of the Ugandan society to embrace and promote peace, for today and tomorrow,” Kateregga added.

Ms. Phina Mugerwa, the General Secretary, Uganda Musicians Association (UMA) promised to leave no stone unturned to promote the I Choose Peace campaign. “Through our network as Uganda Musicians Association (UMA) and diverse talent under our association, we promise to use our fame and talent to bring much awareness about the I Choose Peace campaign to our fans,” she said.

The #IChoosePeace campaign will run until January 2021 and is intended to reach the last mile of the electorate.

About the Netherlands Institute for Multiparty Democracy (NIMD):

The Netherlands Institute for Multiparty Democracy works to promote peaceful, just and inclusive politics worldwide. The institute is non-partisan and driven by democratic values. In Uganda, our overall objective is to help foster a well-functioning, strong and vibrant multiparty democracy since 2009. Our main pillars are interparty dialogue and strengthening the capacity of political parties by working with more than 150 political parties from 25 countries in Africa, Latin America, Asia and Eastern Europe.