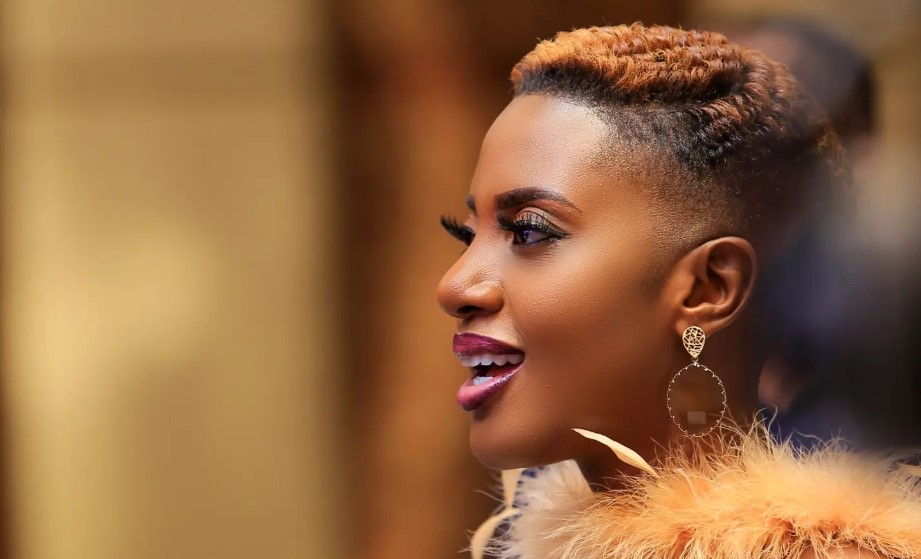 Flona, real name Nankinga Florence is fast rising Uganda’s vibrant female artiste that is striving for the leading artist of this generation niche and looks like her dream will be attained.

Like stars in the sky and like constellations, God alway find a way to let one star shine brighter at a time so that the world would notice them and the genesis of Flona too is a beautiful tale to tell.

Her career came to life the day she belted Whitney Houston’s “l WILL ALWAYS LOVE YOU” in front of music stakeholders while she was still serving as an in-house cook for Blue Note Band that’s under the watch of CRK Planet. The beautiful voice she exhibited that night, captured Counsel Richard Kisuze who is the CEO of the ultrasound label, CRK Planet, and soon signed her onto his roster of artists.

She was then introduced to the music scene to demonstrate her sweet melodies, harmonies, and approach to the Afro-pop sound and did it excellently which earned her the Woman of Distinction award 2021 from the WOMEN OF VALOR FOUNDATION.

Her first song under the label was “Nkuvunana” a love ballad song where she vocalized that strong feeling of affection and how it feels like when you love someone and I return don’t love you back the same.

As a determined artist, since then Flona has never shown any sign of slowing down as far as making classic music is concerned.

Her second single under the same imprints, ‘Ekiteso‘ garnered her a huge fan base that adore her musical style . The endearing song, had a well mastered beat as produced by Nessim Pan Production.

As it’s stated that numbers don’t lie, too, gift doesn’t disappoint, within just a short span in the industry, Flona got recognized and appreciated more locally winning the Most Talented Rising Artiste , Breakthrough artiste, Best Vocals, Best creative Music video, Best Breakthrough Artiste (Female), Best Stylish artiste all in the FAMOUS TEENS AWARDS. She went on to earn other awards, such as the best stage performer, Act to watch, Most talented rising star, Best RNB song, Best video of the year, and Best stylist, from the prestigious HI Skool Awards 21.

I think love songs are something that comes naturally to Flona, Her third single “Kingambe“, was a sweet love ballad with mainly well-arranged shaker sound accompaniment as she shines a light on how it feels when lovers tell how they sense each other.

Other songs that followed are,”Wewano”, “Love Nona“, ” Speed Controlle” a chromed feature with dancehall champion Ziza Bafana where she proved to be quite a versatile artiste who fits in many styles.

To engrave her name as the best female vocalist in the land, not just for this year, but years to come is, Flona released another ballad “Ninze Nyo” – Which now serves up as her 7th single under the watch of CRK Planet.

Adorned in the classic, timeless and indigenous genre of Afro-pop, this song will daze and dazzle you into the woes and extremes of love and relationships.

Flona’s budding intimacy are her piercing vocals, there’s some grace to their nature – especially in how inviting they come off the Baur production’s light piano melodies and smooth electric guitar on this beautiful piece of music.

The lyrics were written by Nessim who again brought her skills on mastering and mixing the song.

It’s without a doubt that I conclude that Uganda received another female artiste that will write history with her powerful voice, Flona.