OVER THERE! Loukman Ali’s “The Girl In The Yellow Jumper” Is On Netflix 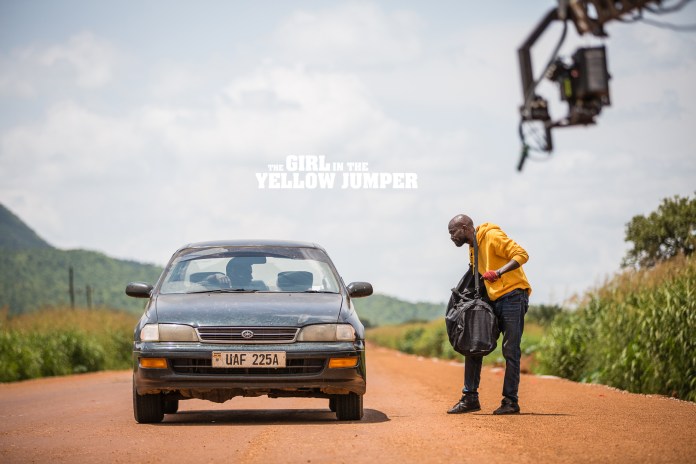 In November this year, the news broke! Ugandan Film director and cinematographer Loukman Ali shared to his socials that his 2020 film “The Girl in the Yellow Jumper” was set to feature on Netflix; making it the first Ugandan production to feature an on-demand streaming service. The film is finally here, and it was indeed worth the wait!

While speaking to Okay AFRICA, the filmmaker shared that in his efforts to show the different facets of Ugandan entertainment, he poured all his efforts into The Girl in the Yellow Jumper and that the film was meant to have a cinema release and premiere on 18th April last year, just after 007’s No Time To Die was due to hit movie theaters, too. But the COVID-19 pandemic left filmmakers from Bond to Bollywood shuffling their plans.

Due to the continued closure of cinemas, Ali then chose to go the YouTube way and started creating and uploading short films to YouTube, including his most recent one “Sixteen Rounds” and “Blind Date”.

“The Girl in the Yellow Jumper” short film tells the story of a man who escapes a hostage situation and returns home with a story to tell, and stars Michael Wawuyo Jnr, Michael Wawuyo, Gladys Oyenbot, Maurice Kirya and Rehema Nanfuka and was shot Northern Uganda in 2018.

On How His Film Made it to the Big Screens in On-demand Television: Ali still while in interview with the good people of Okay Africa revealed that:

“About 2 weeks before the film’s premiere,” he had almost given up on the film but right before he could do so, a friend of his had shared the trailer of the film with someone in charge of acquisition at Netflix, who in turn connected him w ith some wonderful distributors, including Netflix.”

The talented cinematographer recalls scrolling through Netflix’s home page one night looking for something to watch and there it was; a poster that looked like the one for The Girl in the Yellow Jumper“ and upon double-checking, it was the one and Ali describes this feeling as being “over the moon” with excitement as he couldn’t even sleep that night cuz of happiness. Upon that, he revealed the news the next day that, his feature film would be premiering today (26th December).

Looking back and reflecting on the success of this film, Ali recounts that he sometimes goes over and looks at the poster of “The Girl in the Yellow Jumper” and recalls all the hardships his team and him went through to make the film, and that alone he says makes him feel like a success: he says: ‘cause I’m doing the thing my eight-year-old self-dreamt of doing.”

“The Girl in the Yellow Jumper” is now streaming on Netflix. Check out its trailer below, and then head over to the platform to watch and share the good works of Uganda’s Loukman Ali.

Editors’ Take: Being the first Ugandan film to achieve this feat, only means that there’s space for mote entries into the International Market, because all eyes are on Uganda now, just like Wizkid’s breakthrough into the international market with “Essence” brought along stars like Tems, and then CKay, then Buju, and the likes, one win for one, is an opportunity for the rest to shine.

Congratulations Ali on all the success!