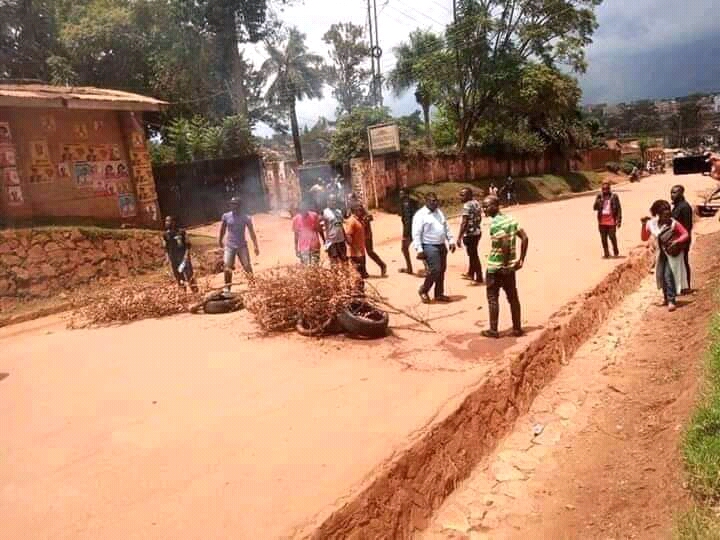 The event promoters expressed their hard feelings to the government for not releasing them to resume with their work since March this year. The entertainment industry was among the sectors which were closed more especially music events by the government due COVID-19 pandemic implying that its hard to observe the SOPs.

However, with time President Museven released others to resume with their work like shops, shopping malls, street venders, markets and the like while music events are still not allowed to operate.

Recently, president Museven addressed the nation over COVID-19 pandemic in which he informed that schools are set to resume on 15th next month. However, the event promoters’ burning desire to be released was not cooled by the President which won some of them an attempt to protest in Katwe yesterday unfortunately, some protested naked asking the government to release them because they do not want to be pushed against walls where they will do self immolation.

” I am not going to burn myself and therefore I extend my dissatisfaction because allowing us to work. The government promised us money but we have not received it up to now an they have also not released to work. Let the concerned allow to work and if not, let them give us money, we heard that president Museven gave us 6 billions to us but where is that money because we have a lot of debts.” said a protester who was naked.

One of the sounding event promoters, Andrew Mukasa allias Bajjo refuted the nakedness kind of protest however, he aruged to meet the fellow concerned so that they resolve the issue.

” Protest in amanner of undressing yourself is bad and getting a mutual understanding is the best option in life. The I am going to meet Gen Kayanja, Abitex,Luba, Gen Salim Salehso that we get the issue sorted, the entertainment industry at large was closed and we are suffering because some of us that was our main source of income and to others it was there only source.” said Bajjo.

” That person’s intention was not to undress himself but he was so angry and maybe he was going to do what is beyond that because he doesn’t even have where to sleep since was chased from the house due to rent defaults . We are not minding about the money that the government promised us but rather we want to be released so that we work. The government should not just keep quiet because many protesters are calling me threatening to protest but I’m just trying to convince them to stay calm and it seems I have reached my limit.” he said.