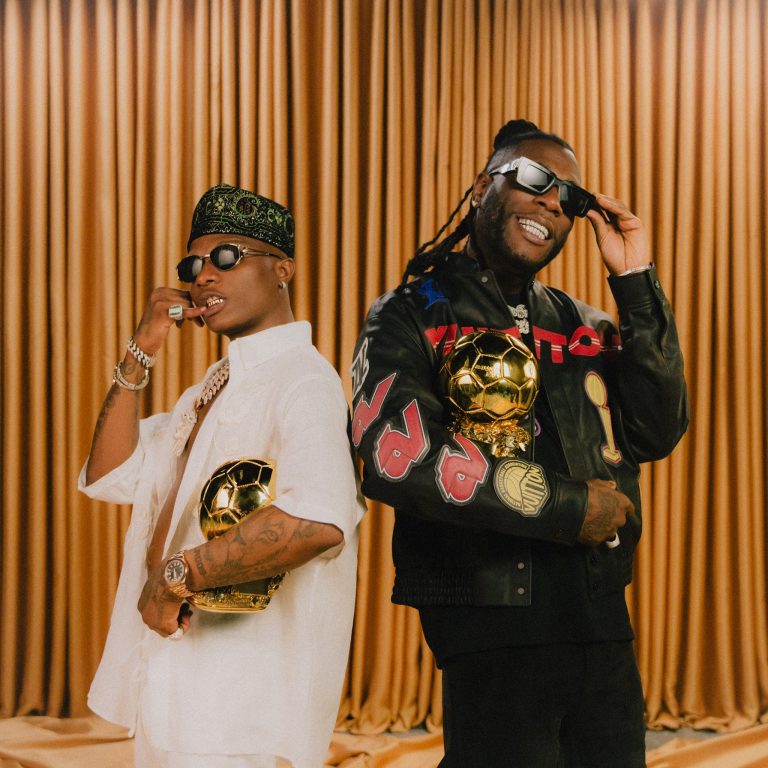 Just in time for the holidays, Africa’s Giant Burna Boy has teamed up with his Nigerian counterpart Wizkid to bring fans an upbeat, feel-good track to send 2021 off back to whatever hole it crawled out of. The duo joined forces to take over your holiday party playlist with single, “B. D’Or.”

The newly released track comes from Nigerian-British producer P2j and grabs its inspiration from one of the most prestigious trophies given to professional soccer players, the Ballon d’Or. The Grammy award-winning pair have created a masterpiece yet again, and their great chemistry, talents and commitment to uplifting each other make them worthy recipients of the high soccer honor.

2021 has been a year of success for both Burna Boy and Wizkid, as they’ve both recently made history for their domination of the international music charts and their reputations among global audiences. Last month, Wizkid made history as being the first African act to sell out 3 consecutive shows at London’s infamous 02 Arena. While last week Burna Boy announced that he will be the first Nigerian artist to headline at New York City’s Madison Square Garden in April next year. Both are doing an incredible job at showcasing the brilliance and remarkable talent that Africa bestows on her children.

The afro-fusion superstar is still reeling on the success of his Grammy-winning 2020 fifth studio album Twice As Tall, as he has sold out multiple international venues including Los Angeles’ The Hollywood Bowl theatre, London’s 02 Arena, and many more on his One Night in Space  tour.

Burna Boy spoke with Zane Lowe on Apple Music 1 about his triumphant run in 2021, telling the host “Man, there’s been too many… I don’t know where to start. All the shows, all the festivals, all the awards. I don’t know which one of them feels best. Hopefully, it keeps getting better. This year I kind of made up for a lot of things I couldn’t do last year. I’m thankful for that.”

The African Giant got huge amounts of international coverage this year and plans on taking it to greater lengths in the new year saying, “I mean, I see it, and sometimes it brings tears to my eyes. I definitely see it. When I don’t see it, I feel it. You understand? It’s something that is my biggest excitement in the whole thing. That’s really what excites me the most about this whole journey.”

Listen to Burna Boy and Wizkid’s single “B. D’Or” here.